Hello World might be the most frequently written computer program. For decades, it's been the first program many people write, when getting started in a new programming language.

Surely, this humble starting-point program should be bug free, right?

After all, hello world programs only do one thing. How could there be a bug? 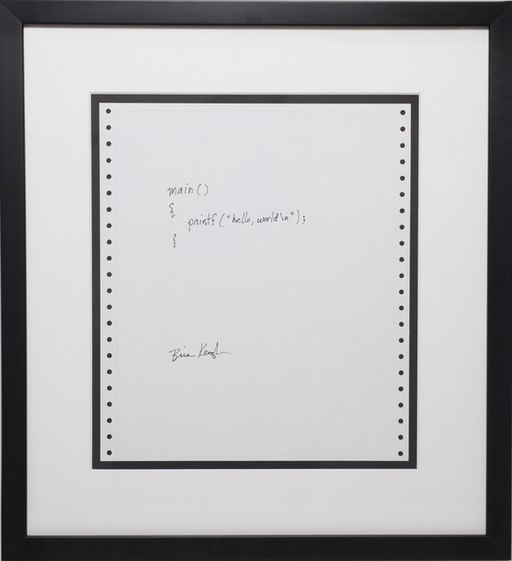 Here's another, this one in "ANSI C":

This is the most careful version of the bunch. It uses (void) to ensure that main is a new-style declaration. It uses the EXIT_SUCCESS macro instead of just assuming that the platform uses 0 to indicate success, which isn't necessary, according to the C standard, but we're not taking any chances here. And it uses the appropriate headers to avoid implicitly declaring puts. This version attempts to do everything right.

And yet, it still has a bug.

All the versions linked above have a bug.

Linux has this fun device file called "/dev/full", which is like its more famous cousin "/dev/null", but when you write to "/dev/full", instead of throwing away the data, it fails. It acts like a file on a filesystem that has just run out of space:

This is a great little tool for testing that programs handle I/O errors correctly. It's inconvenient to create actual filesystems with no space left, or disks that actually fail, but it's really easy to ask a program to write its output to "/dev/full" and see what happens.

So let's test the C example above:

Unlike when we used echo in the shell above, here, we got no output, and the exit status was zero. That means the hello program reported successful execution. However, it didn't actually succeed. We can confirm that it encounters a failure using strace:

There's our "No space" error getting reported by the OS, but no matter, the program silently swallows it and returns 0, the code for success. That's a bug!

How severe is this bug? Arguably, hello world isn't going to be safety-critical anywhere. However, hello world does do something that programs in the real world do: print to standard output, which might be redirected to a file. And files in the real world can run out of space. If a program doesn't detect this kind of error and report it through its return code, its parent process won't know that the child failed, and will continue running as if nothing was wrong, even though the output it expected to have been produced has silently lost data.

For example, consider a program that prints a yaml file to standard output. If standard output runs out of space, the output may be truncated at some arbitrary point, though it may still be valid yaml. So we should expect programs to detect and report this kind of situation.

What about other languages?

We looked at bash and C above; what about Python, which tells us that "Errors should never pass silently"? Here's Python 2:

It did print a message to stderr, though it's a confusing message. However, it also returned 0, which means it's telling whoever ran it that it exited succeesfully.

Fortunately, Python 3 properly reports the error, and prints a nicer error message too:

Using hello world programs from common tutorial sites in a few languages that I happened to try, here are the results:

A more complete and current list is maintained here.